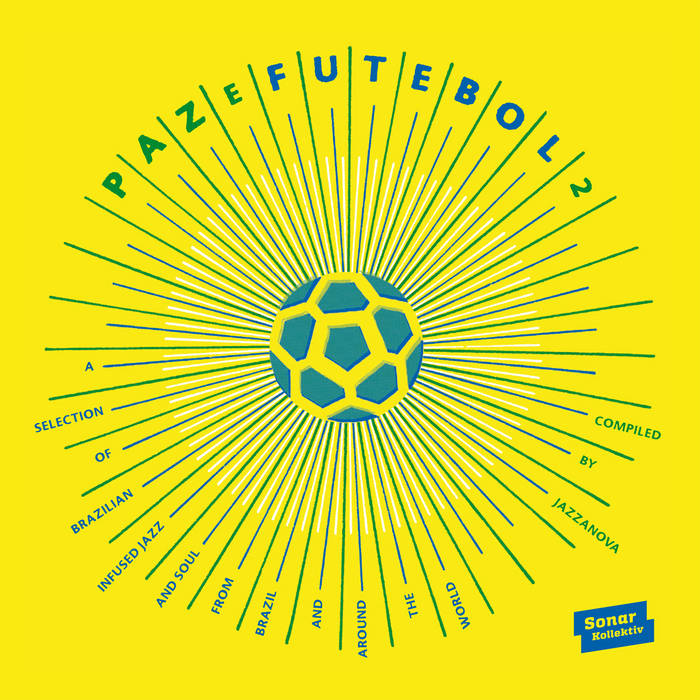 Keneskae Holy jazz, I wish I had the vocabulary to say how good this track makes me feel! Favorite track: Canto Chorado.

Ten years have passed since the phenomenal success of the „Paz e Futebol“ (SK089CD / LP) compilation, released on Sonar Kollektiv. Since then Germany went on to win the Football World Cup in Brazil sparking an increased self-confidence and maybe inspiring the Berlin musical institution Jazzanova to compile again a courageously eclectic showcase of Brazilian music in all its facets and peculiarities.
“Paz e Futebol 2” is the ultimate smorgasbord of all Brazilian music, irrespective of era and location, sporting the true and heartfelt Brazilian vibe. Similar to the football Brazil is known for, where “Brazilian style of playing” means an extra technically ability and finesse, but also an unmatched approach and skill within the sport. This affinity with skill is shown with this expertly curated 19-track-strong compilation.

„Asking Eyes“ by RAFFAELA RENZULLI off her first and only album „Children Of The Light“ from 1987 kicks off extremely laid-back before driving the listeners round the bend just like the ball skills by illustrious soccer star Neymar. This zest for life, this excessive friskiness is the recurrent theme which is constantly present across all eras, continents and genres covered on “Paz e Futebol 2”.For instance, “Dunks” by the meanwhile defunct Brighton based project HARDKANDY. According to composer Tim Bidwell, this a track, when released on the connoisseur label Wah Wah 45s in 2008, which wasn't intended to hold a Brazilian reference but was directed more towards afrobeat influences only now fits perfectly into the new context and narrative of the compilation.

Also “Palmeiras” by the Argentinian combo CANDEIAS is taylor made for this voyage of exploration all around the world in search of the Brazilian vibration. The extremely rare album “Sambaiana” from 1976, which features next to “Palmeiras” another six gems of Brazilian vitality, will incidentally be re-released on NOTES ON A JOURNEY. Also finding a wider public than its initial release is the long forgotten 1983 LP “Num Dia Azul” by the couple MINAS (Patricia & Orlando).


One of the songs off it, “Samba Walk”, was already a part of the first “Paz e Futebol” compilation. Now another track off this extraordinary soulful record, “Calma Mulher”, is included on Volume 2. Orlando Haddad, currently residing in Philadelphia, recalls how he wrote the song for his wife in the early 70's at Ipanema Beach: „It's about a man saying to his woman to calm down, as life is about much more than material possessions. It's about love.“

Then New Zealander NATHAN HAINES steps up for the release with one of his 2003 recordings together with the two singers Marcus Begg and Vanessa Freeman: “U See That”, a track oozing positive energy with its infectious message and beautiful arrangement. Another song entailing exactly everything that also fascinated us so much with what Zico, Sokrates, Eder, Falcao, Serginho etc. did on the pitch.

Talking about legends and veterans, ARY LOBO was one of the most successful singers and composers of the 40's and 50's in Brazil's northeast. It's here where the lesser-known style “Forró” is coming from and unifies a multitude of regionally rooted rhythms like Baião, Côco, Rojão, Xaxado, Xote and Arrasta-Pé. Lobo, as one of the most popular solicitors of Forró, and known for his superb phrasing and his folky feel, appears on “Paz e Futebol 2” with one of his rare 7inch singles: The dancey “Nêgo São” from 1966.

Probably even more rare is the 7inch single by PENHA MARIA „Você Balanca O Meu Coracão (Ou Sol Demais)“, released in 1968 on the Mocambo Rozenblit label from Recife. „É Só Balanco“ by JACKSON DO PANDEIRO & ALMIRA has a similar vibe to it. The song is off the scarce LP “Coisas Nossas” from 1965, the short-spanned samba period of the bandleader normally also closely connected to the Forró style. The rarity of the record is due to the fact that the record company Philips thought these specific recordings were too experimental for Pandeiro and simply pressed a lot less copies. Making this a true diggers anthem.

The compilation then switches things up with the illustrious KATE CEBERANO, the Diana Krall of her mother country Australia. The title track off her fourth, 1990 released album “Like Now” is a beautiful Brazil tribute being a rare occurrence for an Australian release, especially at that time.

Next up is one of Gilles Peterson's favourites, ED MOTTA. Born in 1971 in Rio De Janeiro, Motta is the nephew of legendary Tim Maia and has recorded sixteen amazing LPs up to date and continues to release music on a regular basis. 1997's „Daqui Pro Méier“ is one hell of a dance floor belter which he arranged together with Lincoln Olivetti. The latter has the distinction of being one of Brazil's true pioneers of electronic music and was one of the country's most sought-after songwriters and producers in the 70s and 80s.

A more recent Brazilian release, from 2012, is up next: „Dia de Furar Onda no Mar“ by LUCAS SANTTANA is mesmerizing MPB (Música Popular Brasileira) and valid proof of a prosperous future for the Brazilian legacy heralded on this compilation. With FAFA DE BELEM we take another trip back into yesteryear. The larger-than-life singer and actress (and former sex symbol) is still one of MPB's most successful artists and delivers in her husky mezzo-soprano a veritable showpiece of Brazilian serenity on the 1975 released Polydor single “Naturalmente”.

„Céu Da Manágua“ by PIRY REIS is full of temper and hot-bloodedness. The song written in 1984 together with Geraldinho Carneiro originates from a time when the Brazilian people was revolting against the oppressive (but soon ceasing) military dictatorship – attempting to fight politics with music.

Finally you'll get a samba take from the 1960 founded and still existing combo OS ORIGINAIS DO SAMBA: „Canto Chorado“ from 1969 is a heartwarming tune reminiscent of the pure elegance and finesse of Pelé.

It's not always easy to find such extraordinaire songs with so much vocation and diversity. „Tema Do Azambuja“ by AZAMBUJA & CIA with its perfect and dense arrangement and the sombre synth chords is a perfect example of these unusual songs – a song that possesses the beauty of the Brazilian sound and something worth presenting to the listeners all over planet earth.

And to celebrate all these astonishing findings on this compilation we have two exclusive songs contributed on top. Marc Friedli from Switzerland aka SKYMARK has absorbed the Brazilian spirit in such a manner that by now he has moved his domicile to Rio De Janeiro and here he records such beautiful songs like „Boa Noite Meu Filho (Mental)“ – single-handedly playing all the instruments himself. In marked contrast to the second exclusive song on this compilation, „Gafiera (Instrumental Trio Version)“. The original version can be found on the Jazzanova album „Of All The Things“ which features the three musicians of the Brazilian jazz funk band Azymuth. Alex Malheiros, Ivan Conti and José Roberto Bertram cut the track during the unforgettable recording sessions in Berlin several times on their own and one of these recordings sees the light of day for the very first time right here right now. This way the second edition of “Paz e Futebol” finds a fair and beautiful ending. We hope the passes, the crosses and the precise assists by Jazzanova have been received well by you the listeners and you have gained even more taste for this style of music, which is always so pleasant, delicate and ever so sleek but has always a positive effect on your soul and mind.